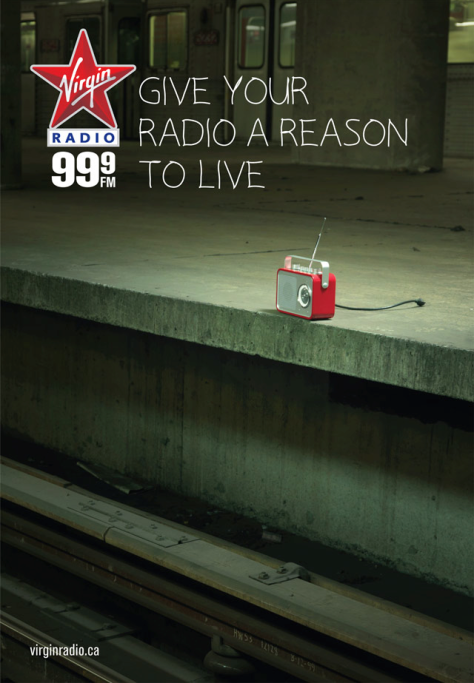 Last week a Virgin Radio ad featuring a suicidal radio, poised at the edge of a subway platform, was pulled for being in poor taste.

I was at my friend’s house when I heard about this ad — we were watching CP24 and it came up on the feed. We both turned to each other and said in unison, “OMG!”

Let me explain why. This friend works at the TTC as a painter. Ironically enough, he spends most of his days removing paint and grafitti rather than applying it, but in his earlier days on the job, he would be assigned to painting the coffin boxes for the jumpers — black with a white cross. You think that’s gruesome? It gets worse. There is also a “death pit” — the mechanics bay where the trains go to be hosed down. Someone has to stand underneath and wash off the bits from the bottom of the train ~ imagine having that job.

So, you can understand why TTC Chair Adam Giambrone didn’t hesitate to pull the ads. After recent attacks at certain subway stations, these ads are not exactly confidence-building. Perhaps if we weren’t in a deep recession, or maybe if the radio had been poised on top of a cliff instead of a subway platform, or if it had been a whole herd of radios running towards the cliff like lemmings, it would’ve slipped under the radar. One thing is for sure, suicide is still too much of a taboo for mainstream media.